May 1, 2020
Domestic vs Import Manufacturing

The ethical considerations between domestic and foreign manufacturing. Also, our real life race against a pandemic.

Made in the USA

The ethos behind Janesi Comfort is the creation of an ecosystem that will allow patients to feel better, physically and mentally. Physically we made choices based off the skin-feel and drape of the fabrics and navigating the fine line between stylish cut and functionality. Behind those choices we also needed to make decisions about the thread compositions and trims, packaging and shipping. My thoughts on those topics are to follow. For emotional betterment every step that went into making our products from planting seeds to putting a robe on your back needs to leave our customers world as nice as it was before they pressed buy. Fast fashion fails on nearly all of those criteria. My late wife Jo supported thoughtful brands because she knew this supported their employees and everyone down-cycle in their quest for betterment. This means earning enough money to sustain and educate a family in a clean environment which brings us to the most labor intensive part of our process: manufacturing.

I made my first 330 units on 37th St. in the garment district. Up until this venture I had only directed my photographic team to make custom pieces or worked with very experienced brands. It was crucial that I be hands-on during all the stages of development. Every person involved in the Janesi Comfort Robe creation had an office within a dozen blocks from the Port Authority Bus Terminal in NYC. Once we made it to production I chose a factory that has been around for decades. I checked with the Dept of Labor for outstanding labor issues and they came up clean. NYC is very competitive for skilled garment workers so you can be fairly confident that anywhere with history is paying minimum wage or their employees would go elsewhere. There is no shortage of jobs for skilled documented workers. I am sure you see the gaping hole in that last sentence. There are many shady shops that change legal names every six months because of labor disputes who treat their employees, many undocumented and thus unable to complain, horribly. I advise avoiding any factory where you can't find a couple years worth of labor records.

I am confident the people who made your Janesi Comfort Robe were paid $15 an hour. But even that is not a living way in NYC which is between $16 an $22 depending on which governmental agency you ask. When I walked into my small factory (there are only small factories in NYC because rent is so astronomical) it was organized chaos. Everything was is in Mandarin and there was loads of production in piles everywhere as they struggled to make high quality garments in a shoe-box. Aside from the street name outside the only visible difference between this factory and what I envisioned when I thought of one overseas is scale because of American rents. Every aspect of the production process gets squeezed. After spending a week in my factory inspecting and trimming every garment that we produced I was left with a major ethical dilemma ; as a company are we better off paying someone in America less than living wage (bad) with our regulations (generally good-ish) or a ethical factory overseas that pays their workers a real living wage (good) and provides benefits and opportunities for the families of it's employees (good)? Is that possible in places with real human rights concerns and a lack of regulations (bad)? If done right the later could be possible.

For Jo, this would have been an easy answer if the realities on the ground proved transparent and accountable. A human was a human in her eyes. This would be another instance of her “leveling the playing field” in action. On top of these broad ethical debates, the week I was signing my contract with a factory was also when the first Covid19 case showed up on our shores. China was in full lock down. I had a thousand yards of fabric leaving Vancouver as travel began to get restricted. Thanks to some deft palate logistics from my fabric wholesaler we were able to get our shipment on a cargo train in lieu of the truck we had booked that could no longer cross the border. That train went straight east through Canada 2000 miles to where our borders were not quite as restricted yet,  crossed through Toronto and made it's way to NYC. (side note after a month of quarantine; this is exactly why pandemic responses need to be national. There were no cases in BC for weeks after this but it shows the flaws in state-by-state ordinances) I received my first round of products a week before NYC became a ghost town. I only tell this story to illustrate why I sensed that our supply chain could be in peril. Simultaneously I was questioning the ethics of domestic production while also sensing that it might not be an option in the near future. I never dreamed in early February how drastic and long lasting that premonition would prove true. On April 18th as I type this we still have no idea when our factories in NYC will be able to safely reopen.

Given this realization I started to read people like Everlane's manifestos on their factories and was inspired. By this time I sensed that China was going to reopen months if not a half year ahead of the interesting companies I might employ in the future like MAS in Bangladesh and Nobland in Vietnam. I found a certified factory in China that pays their workers a living wage (well above minimum wage) where they work in a immaculately clean facility with currently technology. They also have the ability to produce huge quantities when that time comes. So on this snowy Saturday I am pouring over samples that were made on Tuesday. Simultaneously I am crafting this story; Why manufacturing in China makes ethical sense for us. There are lots of ways for things to go wrong in China but I am confident that with high enough QC and ethical partners it is the right choice for us right now. Also, we plan on doing limited runs of robes with celebrated artist's prints in the near future. These small runs will likely be made in America and we are concurrently looking for a factory in a location with lower costs of living. These robes will likely cost 50% more but will be limited edition collaborations. 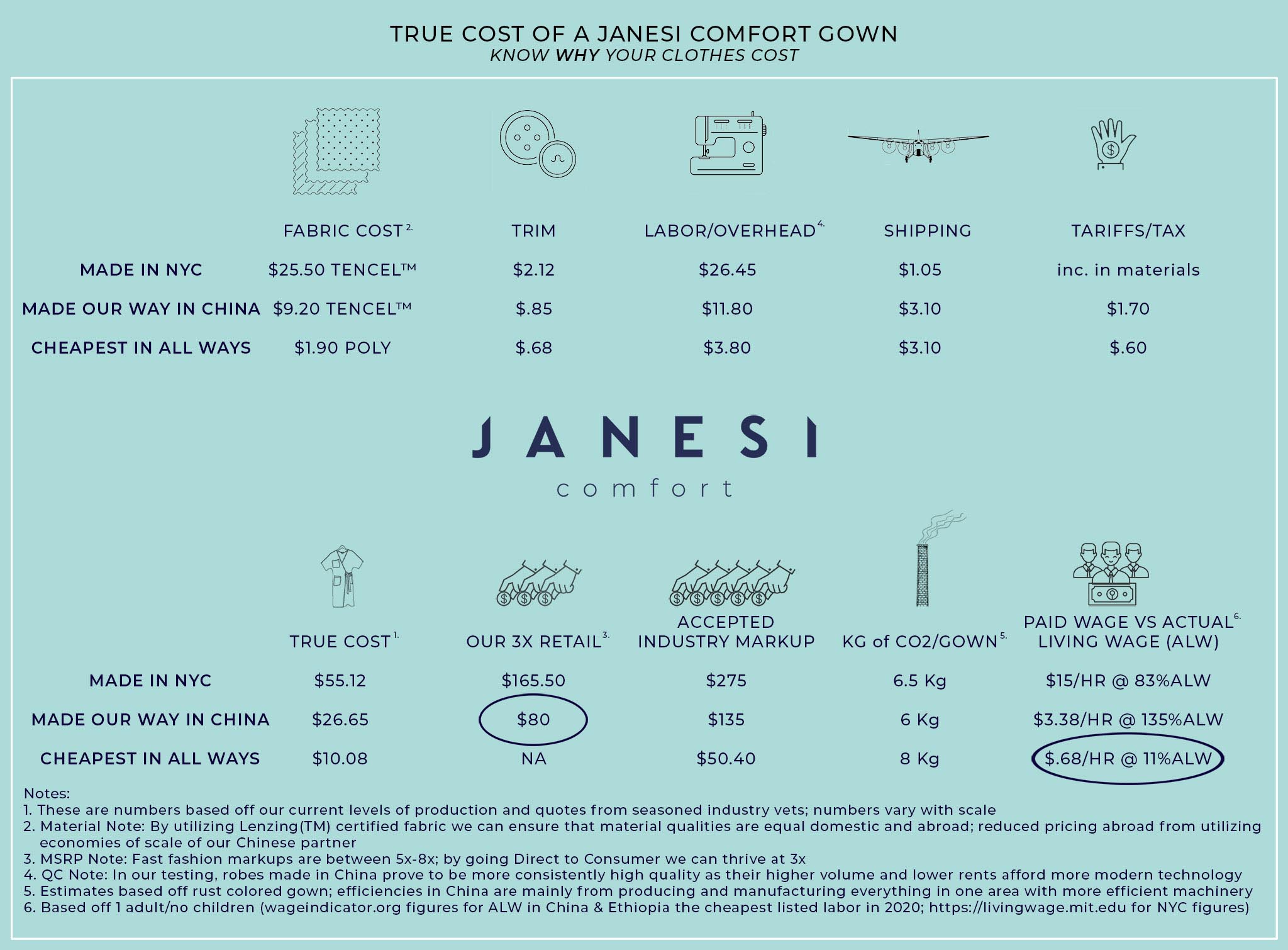